Developed in collaboration with The Michael J. Fox Foundation, this model contains a deletion of the Park2 (Parkinson disease [autosomal recessive, juvenile] 2) gene, encoding for the protein Parkin. Mutations in Parkin have been linked to early-onset Parkinson's disease (PD), making this model useful to further understand the role of Parkin in PD.

In humans, loss of function of Park2 leads to a form of familial Parkinson's disease. The Parkin protein is part of the ubiquitin-proteasomal enzyme pathway and may help degrade other proteins that are toxic to neurons. Roughly 20% of patients with Parkinson's disease onset before age 40 have mutations within Park2, making this an ideal model for the study of Parkinson's disease.

The Park2 Parkin KO rat model was originally created at SAGE Labs, Inc. in St. Louis, MO and distributed out of the Boyertown, PA facility. The line continues to be maintained through the original SAGE Labs animal inventory acquired by Envigo. 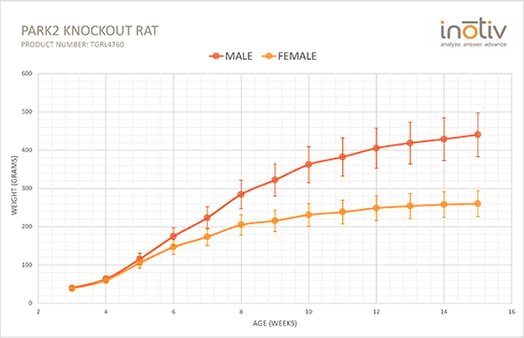